White-lipped peccary species may be in steep decline

With forests depleted by development, the pig-like animals are disappearing rapidly, scientists have found in a new study. 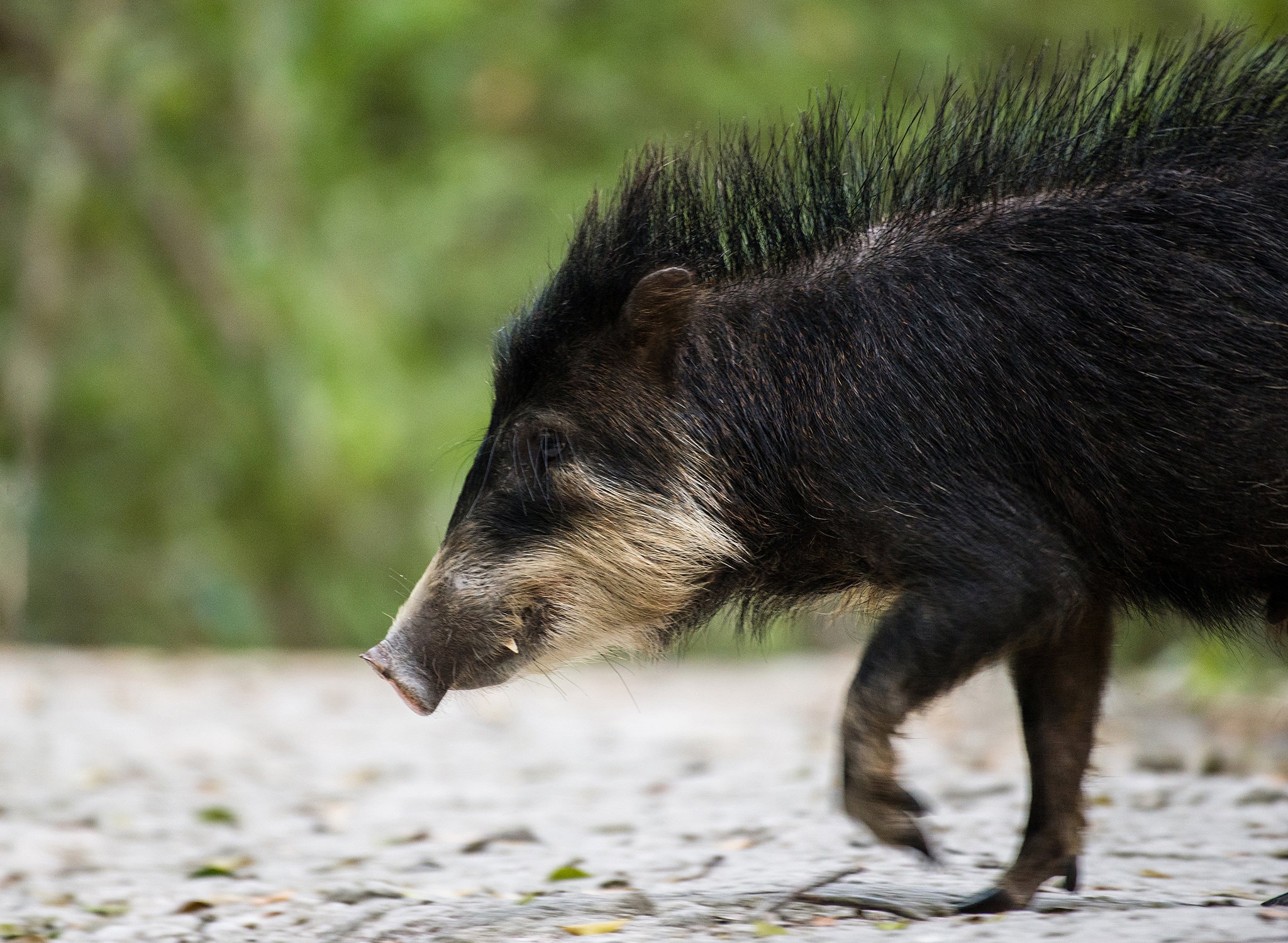 A new study suggests that the territory roamed by white-lipped peccaries in Mexico and Central America has shrunk by as much as 87–90% from their traditional range, and 63% from previous estimates. Photo: Apolinar Basor

White-lipped peccaries travel in large packs throughout the forest. The hairy, pig-like creatures emit a distinctive musky smell that is not easy to forget, and play a crucial role in their ecosystems, dispersing seeds and creating habitats for insects and amphibians.

Now, though, the species is facing a crisis. A recent study published in the journal Biological Conservation finds that the territory roamed by white-lipped peccaries in Mexico and Central America has shrunk by as much as 87 to 90 percent from their traditional range, and 63 percent from previous estimates.

It’s not clear exactly how many animals remain, because of the difficulty of counting them, said Daniel Thornton, SoE assistant professor, who led the research. The new study relied on camera traps and local experts to identify territory where the social creatures still roam.

White-lipped peccaries are extremely vulnerable to human activity. They need a wide territorial range, they move in big groups and aggressively face threats instead of fleeing to safety, and their meat is highly prized, Thornton said. “They have the trifecta of bad characteristics for a species that wants to survive in human-dominated landscapes, unfortunately for them”…

Interdisciplinary research to save amphibians worldwide 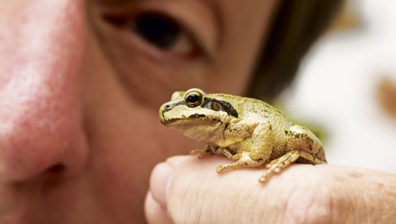 A diverse group of WSU scientists share a common, critical goal: to prevent the occurrence of a second fungal pandemic—an explosive threat looming just over the horizon.

Their collective efforts have put WSU in the national spotlight as an emerging center for amphibian research.

Read more at “Where have all the frogs gone?” in Washington State Magazine

Along a muddy path around the little pond at Virgil Phillips Farm Park just outside Moscow, Idaho,  Caren Goldberg assembles her eDNA collection system. Dressed in jeans and tall rubber boots, she kneels in faded grass near the edge of the water where two male Columbia spotted frogs have staked out territories. 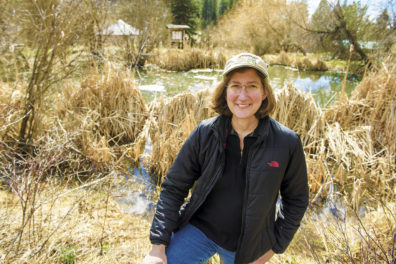 She quietly lowers a plastic tube into the pond and uses a hand pump to draw water up through a filter and into a flask. With tweezers, she carefully removes the wafer-like filter and stuffs it into a test tube.

Goldberg, an assistant professor in the School of the Environment, is a pioneer in the development of environmental DNA (eDNA) techniques that simplify the ability to screen for pathogens like Batrachochytrium dendrobatidis (Bd) that can be spread through the international pet trade.

Back in her laboratory, she will extract DNA from the skin cells, feces, urine, and other bits of material left behind by aquatic inhabitants. The DNA is then run through assays to identify target species of fish, amphibians, snails, turtles, and other creatures. With that one sample, Goldberg can also detect rare and invasive species as well as disease-causing organisms like Bd and ranavirus.

As one of the world’s leading amphibian eDNA researchers, Goldberg analyzes more than a thousand samples each year from all over the world. She and her team have developed nearly 50 assays, each uniquely designed for a particular species.

Not only does eDNA improve and simplify the process of monitoring aquatic species, it’s also safer, more efficient, and minimally invasive. Now, instead of tromping through fragile wetlands—turning over rocks and kicking up mud, which can harm the animals living there—scientists can get answers with only a few water samples…

Seattle: When it rains, it pollutes

Read more and watch the video

Read more and watch the video

Hibernation works for bears. Could it work for us, too?

A grizzly’s body can slow down for months without damage. Researchers wonder if the ability can be harnessed to aid human health. 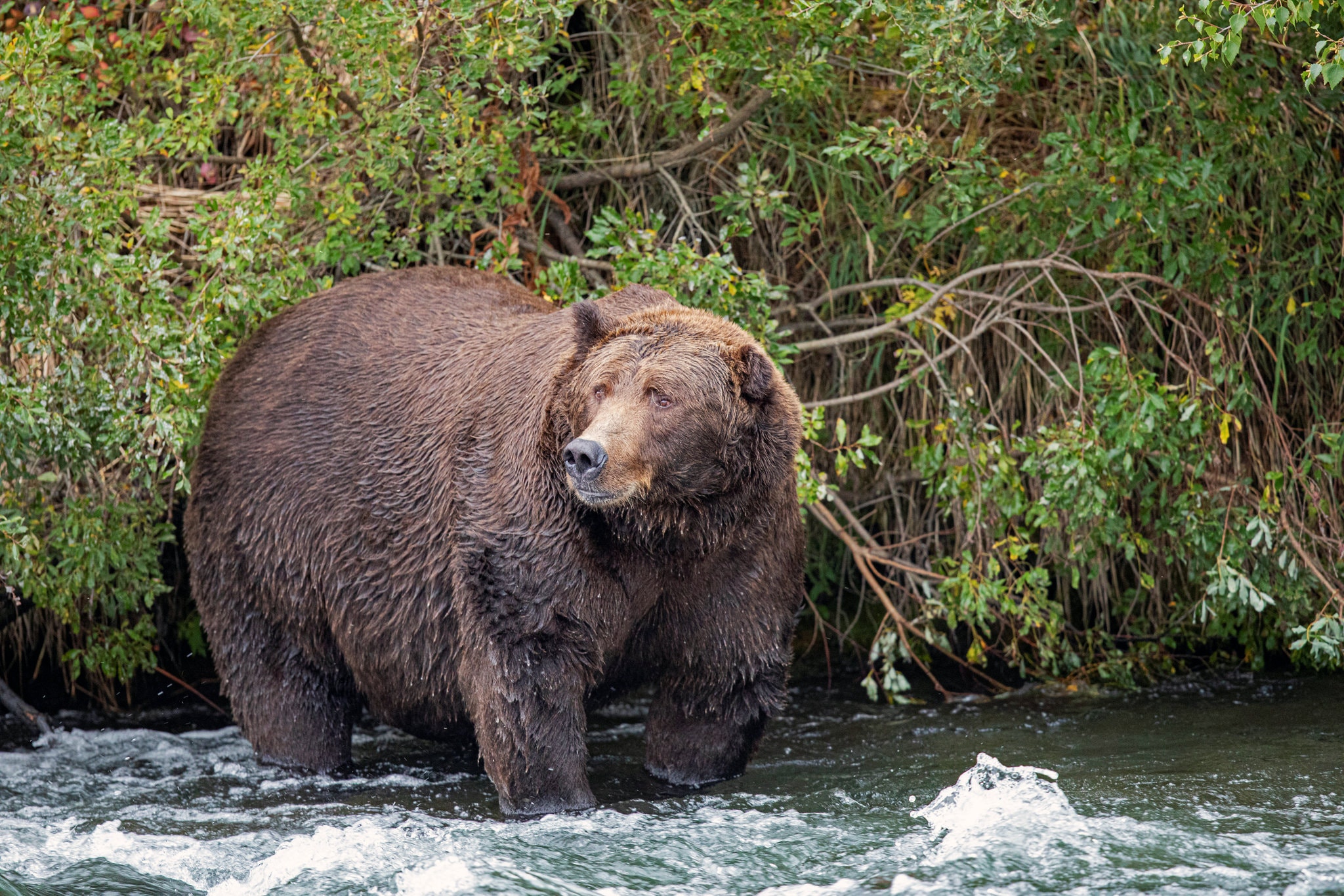 There are three major seasons in the life of a bear: the active season, beginning in May; a period of intense eating, in late September; and hibernation, from January into spring. Physiologically, the hibernation period is the strangest, and the most compelling, to researchers.

When a bear hibernates, its metabolic rate and heart rate drop significantly. It does not defecate or urinate. The amount of nitrogen in its blood rises sharply, without damaging the kidneys or liver. The animal becomes resistant to insulin but doesn’t suffer from fluctuations in its blood sugar levels.

A human experiencing those conditions—every year for several months at a time—could easily end up with diabetes, obesity, bone loss, atrophied muscles, or worse. But each spring the bear emerges no worse for wear, albeit a little groggy.

A group of researchers at Washington State University published a study in Communications Biology in September that sought to better understand what goes on in the cells of hibernating grizzly bears. The university is home to the WSU Bear Center, the only grizzly bear research center in the United States; it houses 11 bears that were either raised in captivity or relocated to the center after being identified as problem bears in the wild.

Researchers took samples from the liver, fat, and muscle of six captive grizzly bears at three times during the year. In the lab, a team of researchers analyzed the DNA to understand the changes that occur in the cells over the course of the year.

In the early days of hibernation studies, researchers were on the lookout for a physiological trigger, something singular and obvious that set the process in motion—something, perhaps, that scientists could isolate and “inject into a non-hibernating animal, and have them fall over and go to sleep,” said Charles Robbins, SoE professor and director of the WSU Bear Center. “Now we realize that there are an enormous number of genes changing.”…

Since boyhood in Holland, Arjan Meddens has loved experiencing the wonders of the forest, firsthand.

WSU’s newest forest ecologist is also lifting his vantage point high above the trees, using drones, airplanes, and orbiting satellites to discover how our forests can survive devastating fires and insect outbreaks.

“I’m naturally curious,” he said. “I love to think about processes and how they work across landscapes and different time periods.”

While much of Meddens’ research involves hands-on work with measuring tape, pad, and pencil in the field, remote sensors play an increasingly important role. High-resolution cameras help him and his students study the color and health of foliage, while light detection and ranging, or LIDAR, sensors, use laser pulses to create 3-D maps of the forest.

These tools help Meddens understand how forests recover after fires, and predict areas at risk for future blazes and bug invasions…

Yellowstone Supervolcano: Scientists can now tell how fast molten rock is bubbling up below the surface

Note: The images below show work in Yellowstone National Park. All work was done under an approved Park research permit and all safety precautions were observed. 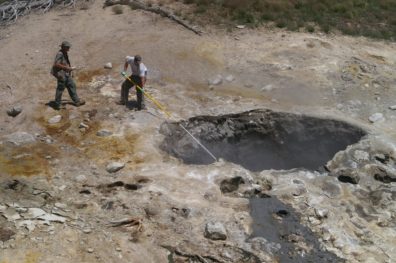 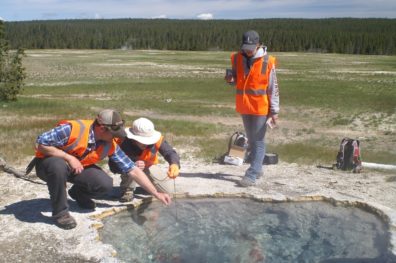 SoE professor Peter Larson has had an active research program in Yellowstone National Park since about 2005. The work has proceeded in two stages, with the first being investigation of the hydrothermal alteration in the Grand Canyon of the Yellowstone River. There, Larson and his research team can see the effects of water/rock interaction in the subsurface, below the hot springs. Many people are familiar with images of the altered and discolored rocks in the Canyon below the Lower Falls. These rocks were the object of Larson team’s research, although they worked a bit further downstream at Sevenmile Hole. Larson did some of this work in collaboration with David John, a USGS economic geologist out of Menlo Park, and Mike Cosca, USGS Ar/Ar dater in Denver. A number of graduate students were also involved in this work.

The second phase began about eight years ago and grew out of weekly coffees Larson had with Jerry Fairley of the University of Idaho. The researchers work with hot springs in effort to understand their workings and to learn more about the Yellowstone system as a whole

This work has been supported by two NSF grants and was covered in Newsweek and other international media in 2018, when the paper with Nick McMillan came out.

The projects’ success is due to some outstanding grad students working in Yellowstone, including Chad Pritchard, now a tenured faculty member at Eastern Washington University, and Allen Andersen, now an economic geologist with the USGS in Spokane.

Read more in Newsweek and in McMillan et al., 2018

Cyanobacteria blooms & organisms that interact with them are targeted in a study with a larger purpose. 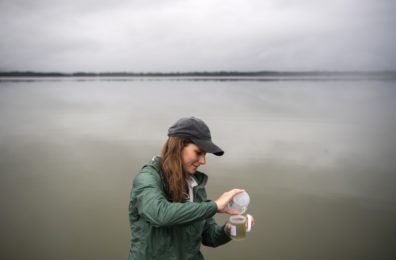 During a downpour in mid-September, Katie Sweeney, outfitted in rain pants, boots and a raincoat, knelt down on a dock at the Vancouver Lake Sailing Club and started collecting water samples.

Since May, Sweeney has made this a biweekly routine as part of her graduate studies at Washington State University Vancouver while she pursues a master’s degree in environmental science. Sweeney focuses on smaller organisms in Vancouver Lake, and their interactions with cyanobacteria blooms.

It just so happens that cyanobacteria blooms have been present at and closed Vancouver Lake this year, so the public also has an interest in the same things she does.

“We always have an interest in these sort of things scientifically, but it’s always really when cool when the public starts to take notice, and become interested in the science behind it,” Sweeney said. “It’s enlightening or endearing that somebody outside is interested in what you do.”

Sweeney’s major professor for her master’s work is associate professor Gretchen Rollwagen-Bollens, who along with her husband, professor Stephen Bollens, has been studying Vancouver Lake and its cyanobacteria blooms for about 13 years. They co-direct WSUV’s aquatic ecology lab together…

Read more in The Columbian 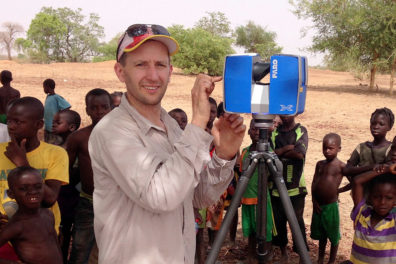 While shocking images of floating islands of plastic trash in the world’s oceans cause widespread alarm, a more insidious threat to ecological and human health may be the nearly invisible microplastics in local waters, according to Alex Fremier, a riparian ecologist at WSU.

Tiny bits of plastic, measuring less than five millimeters, that enter the food chain, or web, can pose direct physical and chemical harm to numerous organisms, including humans, Fremier said.

“We need to understand more about microplastics and their potential health risks with released toxins,” he said.

Last July, he went to Belém, Brazil, through a four‑month Fulbright Global Scholar Award, to collect water, fish and sediment samples in the Lower Amazon River Basin with the aim of learning where microplastics occur in the regional web of human food…